It’s not just that she was a CONSTANT, RELENTLESS, RUTHLESS, TRUTH-SEEKING, IRRITANT to the most powerful men in the world who hid behind an iconic podium and shook and cowered in their $2,000 shoes before her — it was that she was COMPLETELY FUCKING FEARLESS in her CONSTANT, RELENTLESS, RUTHLESS, TRUTH-SEEKING IRRITATION. With Helen Thomas and her perpetual red dress firmly planted on her dedicated perch in the front row of the White House Briefing Room, they got away with NOTHING. She was both their TORMENTOR…and their LIBERATOR.

For SEVEN DECADES…Miss Helen Thomas was THE QUEEN OF DGAF. For SEVEN DECADES…when it came to hunting down THE TRUTH, she gave a fuck SO much, that she DIDN’T GIVE A FUCK — and because of this unbowed tenacity, she earned the respect of journalists, politicians, and citizens alike, from BOTH SIDES of the political and cultural spectrum. As a Feminist, even as a young girl, she was a HUGE hero of mine, inspiring me all of my life to PUSH ON…HARD and WITHOUT FEAR.

Her Kind shall not pass this way again. 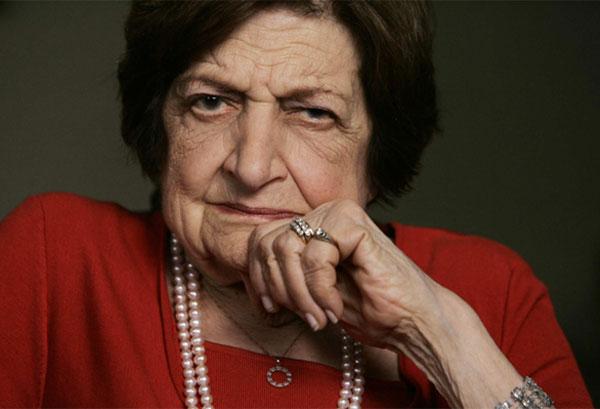