Posted on February 9, 2007 by muffybolding

For whatever else you might think about Anna Nicole Smith and her questionable methods regarding upward mobility — and perhaps even more questionable claims to legitimate fame — in the end she was nothing more than a working class girl and a teenage mother who clawed her way out of the abject poverty into which she was born…and for me, having done precisely the same, I just have to say that there is a part of me that understands exactly what compelled her. I understand the notion of reinvention; I have lived it. I AM living it.

For all the drugs, marriages, diets, centerfolds, and legal quagmires that her life had degenerated into — and gosh, what an epic trainwreck it was — I believe, in the end, she was nothing more than an extremely damaged and fragile human being…who simply could not move or breathe beyond the tragic death of the child to whom she had given birth while still a child herself and with whom she had consequently grown up. It was reported that when she awoke that morning in September of 2006 — just three days after giving birth to her second child, a daughter — and discovered her 20 year old son not breathing and unresponsive in the chair next to her bed, it took the doctors and hospital staff FOUR HOURS to pry her off his dead body. At his funeral, she demanded they open the coffin and then tried to climb inside. She said that, “If Daniel has to be buried, I want to be buried with him.” — and I have NO DOUBT that she TRULY MEANT IT WITH ALL OF HER SHATTERED HEART. That’s a biological thing, a cellular thing, an animal thing…and I understand it to the very core of my being. In fact, those same primitive urges ARE the very core of my being; they are every mother’s.

I hope she finds the peace in death that she never, ever knew in life — and that wherever she is, she is with her treasured son and that she feels safe and secure and thin enough and good enough…and loved. At last. 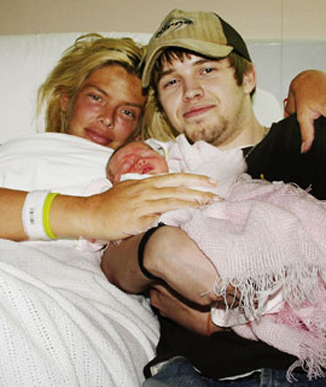