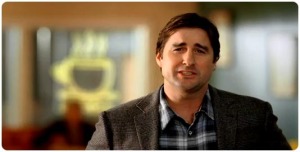 What’s up with Luke Wilson and that inexplicable meatface? His body looks pretty much the same…and yet his face looks like…well, it looks like MINE.