This morning, my old friend — the awesome, intrepid artist, Gabriel Liston — posted simply the following as his Facebook status update: “muffybook”…to which I curiously inquired if he were referring to me…or to some hot, new, vaginally-inclined social networking site. To this, he responded: “I lay in bed while Danielle reads me your notes from her iphone. That is what I do. Everything else is gloss.”

I have to say that this might just be the nicest thing anybody ever said to an old Fresno hooker like me. Thank you for such sweetness, Herr Liston — I adore you no end. Now…pack your youngest child on ice — you know, she who sends her crazy Auntie Muffy the VERY BEST birthday wishes of all! — and ship her out same-day airmail so that I might feast on her tasty little Freddie Flintstone foots this very gottdamned evening. 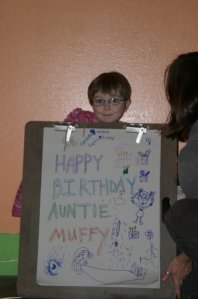