Oh, my god, I am the only one awake in this house and I just went in and made my fatass some REALLY GOOD, REALLY STRONG French roast and while it was a’ brewin’, I did a bit of washing up…and then headed back towards my room to see if the two little sniveling piglets had yet arisen in bed with Gregory and whilst I was heading back here I realized I was actually walking and wiping my hands on a white, cotton tea towel…and just for a moment, I felt like Olivia Walton, as played by Miss Michael Learned — who always seemed to be walking into some room or other, drying her careworn hands on a tea towel with a concerned look on her face…though, to be honest, the only thing I am concerned about right now is that I wish Gregory would wake up so I could kiss his sweet face.

This Muffy Moment brought to you by Starbucks coffee and the chilly, gorgeous, grey sky that currently exists outside my bedroom window and inspires me like nothing else…except maybe a kiss from a cute, snoozy Jew boy and dos BOSS chihuahuas. 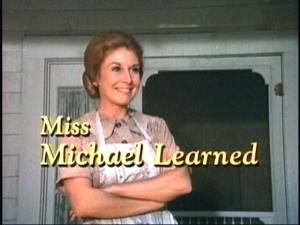