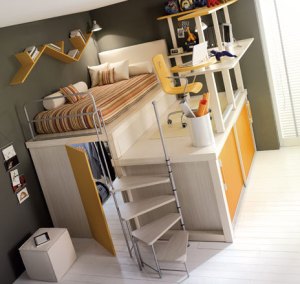 KIDS? Shiiiiiiiiiiiit. Knitter, PLEASE. My kids can KISS MY BIG FAT ANCIENT ASS. Children are undeserving of such a FINE LAIR. I want one of these COMPLETELY OFF-THE-HOOK-AWESOME loft bedroom set-ups FOR ME! Talk about a ROOM OF ONE’S OWN. I’d load it up with all my books, crank on the History Channel, skip-kick the gottdamned A/C down to 58, stock up on NORO yarn and iced tea with stevia, tuck those two delightful chihuahuas underneath my GUNT, lock that fucking door, and, aside from My One True Love — whom I would sneak in for breathless conjugal visits — no one would ever see me again. EVER.﻿

I VANT TO BE ALONE.﻿