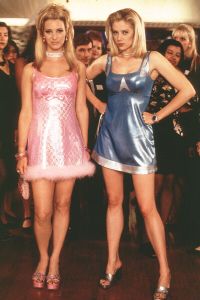 The Bechdel Feminist Test for Film: “The Bechdel Test﻿ is a simple test which requires that a film meet the following three criteria to qualify: (1) It has to have at least two women in it, who (2) talk to each other, about (3) something besides a man.”

And Holy-Mary-Mother-of-God-in-baby-blue-saddleback-Dittos, am I writing such a film right now. This one, my poppets, might just be a GOTTDAMNED GAMECHANGER.