Posted on September 12, 2010 by muffybolding 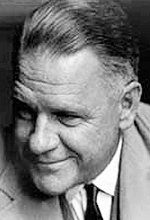 “It’s only with great vulgarity that you can achieve real refinement, only out of bawdry that you can get tenderness.” — Lawrence Durrell﻿