we got the beat

Posted on September 15, 2010 by muffybolding

Muffy Bolding Chola Moment of the Day: Today at Target, I actually got into a FULL ON girl skirmish/bitch fisticuff with Miss Jackie Beat﻿…OVER A DRESS WE BOTH WANTED. Shit, Homes…I took off my hoops, put the baby in the stroller, handed my Bud Light to Junior and Lil’ Tiger, and proceeded to rechristen that pinche puta as Jackie BeatDOWN. I got a fistful of that bitch’s tired weave…and she got the dress. GOOD TRADE.﻿ 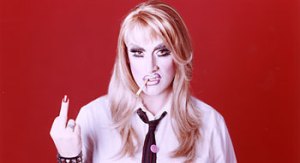