Gosh, yesterday was so relaxing — just hanging out at home with my One True Love and all the babies, drinking coffee, knitting, and reading to my heart’s content. Then, last night, a delicious Kimchi orgy of EPIC proportions at my favorite Korean restaurant with both my beloved husband, Gregory, and my beloved gusband (GAY husband), Jackie Beat. It was everything a Mama could want. But you see, no matter how wonderful yesterday was, I had already gotten the very best Mother’s Day present Thursday night — and it was the one for which, in all of my years as a parent, I am most profoundly thankful.

The Baby Goat and her roommate were having a small Cinco de Mayo get-together at their adorable little apartment in Pasadena Thursday evening — nothing loud or rowdy, just a flock of delightful 19 and 20 year old college students drinking cold Coronas, watching Will Farrell movies, and reveling in the awesome state of just being YOUNG.

At about 9:30, there was a knock on the door and TBG bounded over to answer it (yes, she bounds, and occasionally even frolics!). She opened it, cheerily stuck her head out to greet what she assumed was a late-arriving guest — and when she did, she heard the words, “Party’s over” hissed at her in a voice directly out of a nightmare. She then felt a sensation that I pray none of your own children will ever know: The business end of a shotgun being placed against her forehead.

Let me take a moment to reiterate that for you: A COMPLETE STRANGER WAS HOLDING A SHOTGUN DIRECTLY AGAINST THE FOREHEAD OF MY BEAUTIFUL CHILD.

The person outside the door then pointed the gun at a young man who was a guest…and actually cocked it. I cannot even imagine their terror.

Needless to say, both are fine today — but it was a truly harrowing few moments. Apparently, the COMPLETELY BATSHIT, BAGGIED-OUT, 70ish, GRANNY FUCKING CLAMPETT who lives across the courtyard from them in their charming little complex doesn’t approve of parties, or Cinco de Mayo, or Will Farrell movies, or friends, or young people, or exuberance or happiness of any kind. Fortunately, I don’t expect she’ll have to worry about dealing with too much of that where she’s going. Two counts of assault with a deadly weapon and a $200,000 bail suggests that the courts and law enforcement here don’t take too kindly to some lunatic fucking seahag pointing a gun at an innocent young woman’s head — although, trust me…whatever rat cage that sorry bitch ends up in would be FAR preferable to being locked in a room with me, my Louisville Slugger, and AC/DC’s Back in Black cranked to 11 for about half an hour. FUCK HER.

At any rate, our darling girl is now safely staying with us until this entire travesty has been sorted. She was definitely shaken by the experience, but lemme tell you, that is one FIERCE, HILARIOUS Baby Goat. Her Tweet the next day? “I call SHOTGUN!” Not only will she be fine, she will be better than fine. She (along with her brother and sister) is one third of My Entire Reason for Living — and I could not be any prouder, nor more in awe of her if I tried. I am so thankful that she’s still here with us. She’s SOME BROAD.

Happy Mother’s Day to me, indeed. 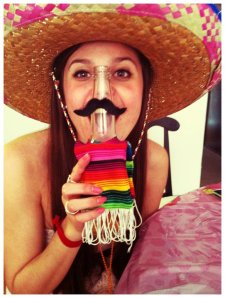