Posted on February 9, 2015 by muffybolding

If there is ONE THING that bewilders and confounds me, it is women who will occasionally do what I call, “Bumping Up Against Me” — a quick cultural coup-count/test joust to see if I will compete with them for Queen Beeship. HA! Without exception, they are ALWAYS left disappointed…as I HAVE never and WILL never participate in such pointless, ridiculous, unhelpful, estrogen-fueled Reindeer Games. In fact, I DO NOT EVEN UNDERSTAND THEM. They are literally BEYOND MY MEAGRE COMPREHENSION.

Look, I don’t give a shit about Girl Hierarchy or MY RANKING IN IT. Believe me, it’s hard enough to do battle against both A VERY REAL SYSTEMIC PATRIARCHAL POWER STRUCTURE IN PLACE SINCE THE BEGINNING OF TIME and MYOWNFUCKINGSELF. To bump up against other women in a pathetic attempt to test the size of their BIG SWINGIN’ OVARIES? I just don’t get the point.

I do, however, find the tendency SO GODDAMNED DESPICABLE and REPUGNANT and PATENTLY AGAINST EVERYTHING THAT I STAND FOR, that, mark my words, if you try it with me, no matter how cleverly subtle you think you are being…I WILL SMELL IT ALL OVER YOU. I probably won’t even call you out on it, as it would most likely fall on deaf, double-pierced ears, and, hey…you already know you are doing it, anyway, right? In fact, I will probably just flash you a dazzling smile, right then and there and every single time I see you out and about thereafter, in perpetuity. I never did much like a public scene. But, trust me, sister…YOU’RE OUT.

With that said, I am VERY fortunate in this life to be surrounded by SO many powerful, extraordinary women — and to be part of such a fierce, delightful coterie of creative broads who collaborate, love, support, and inspire each other…and who, instead of RUTHLESSLY COMPETING in an attempt to TAKE OTHER WOMEN DOWN, instead CHAMPION and CELEBRATE each other’s dreams, talents, victories, and successes. Women who get that, if we stick together, help and support each other, and are willing to work hard for it, we can ALL SUCCEED.

And, WHY THE FUCK NOT?

I treasure them all endlessly — THEY KNOW WHO THEY ARE — am eternally grateful for their support and belief in me, love them with ALL my wicked, wicked heart…and will be there for them, singing their brilliant praises, UNTIL THE BITTER GOTTDAMNED END. Count on it. 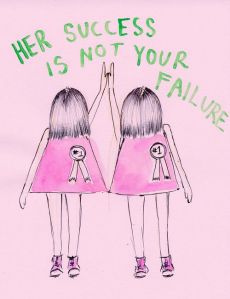