“I’m sometimes asked when will there be enough [women on the supreme court]. And I say, ‘When there are nine.’ People are shocked. But there’d been nine men, and nobody’s ever raised a question about that.” — The ULTIMATE BADASS, Supreme Court Judge Ruth Bader Ginsburg. ‪#‎NotoriousRBG‬ 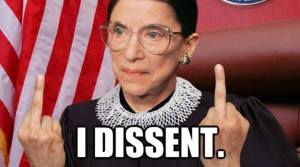