When I am at Starbucks placing the order for my usual — a large soy latte — when the barista inevitably asks me, “Would you like that iced or hot, Miss?”, I ALWAYS look them straight in the eye and answer, “Hot. LIKE ME.”

Then they inevitably belly laugh in surprise and delight and I add, “Honey, when you’re old and fat and a COMPLETE piece of ass like I am, you can TOTALLY say that, too. Trust me, I’ve earned it, Darling. I AM FUCKING HOT.” 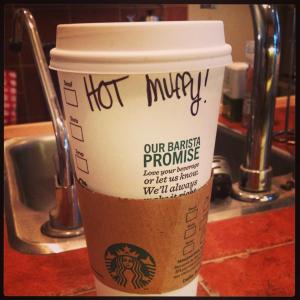