In honor of International Women’s Day, 2016:

These FIERCE, FEARLESS, FED UP, PISSED OFF, RIGHTEOUS WOMEN IN PINK are the BIGGEST BADASSES WHO WALK THE PLANET.

We need to start a chapter right here in the US.

Oh, my stars…I am SO IN. Aside from getting to BUST SKULLS, BUNT NUTS, and FUCK PRICKS UP…I look ABSOLUTELY ADORABLE IN PINK.

“The Gulabi Gang is an extraordinary women’s movement formed in 2006 by Sampat Pal Devi in the Banda District of Uttar Pradesh in Northern India. This region is one of the poorest districts in the country and is marked by a deeply patriarchal culture, rigid caste divisions, female illiteracy, domestic violence, child labour, child marriages and dowry demands. The women’s group is popularly known as Gulabi or ‘Pink’ Gang because the members wear bright pink saris and wield bamboo sticks. Sampat says, “We are not a gang in the usual sense of the term. We are a gang for justice.”

The Gulabi Gang was initially intended to punish oppressive husbands, fathers, brothers, and bosses, and combat domestic violence and desertion. The members of the gang would pay visits to abusive husbands and demand they stop the beatings. When obstinate men refused to listen, the gulabis would return with large bamboo sticks called laathis and “persuade” them to change their ways. “When I go around with a stick, it’s to make men fear me. I don’t always use it, but it helps change the mind of men who think they are more powerful than me,” says Pal.

Today, the Gulabi Gang has tens of thousands of women members, several male supporters and many successful interventions to their credit. Whether it is ensuring proper public distibution of food-grains to people below the poverty line, or disbursement of pension to elderly widows who have no birth certificate to prove their age, or preventing abuse of women and children, the Pink sisterhood is in the forefront, bringing about system changes by adopting the simplest of methods – direct action and confrontation.

Although the group’s interventions are mostly on behalf of women, they are increasingly called upon by men to challenge not only male authority over women, but all human rights abuses inflicted on the weak. 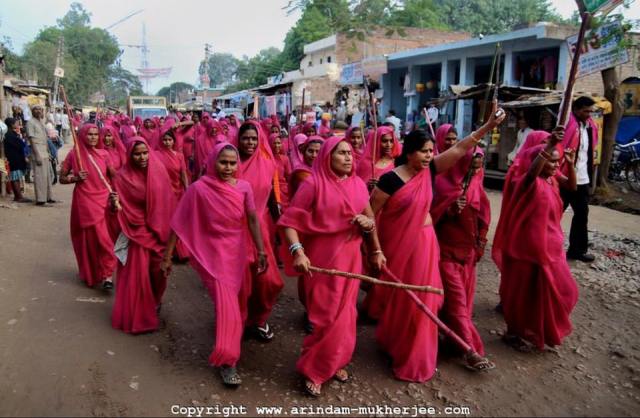