Yeah. Mama has fucking HAD IT with all this annoying, precious, fetishized, commodified, overblown, HORSESHIT, 21st Century parenting.

Children who are a COMPLETE imposition on the lives of their TERRIFIED, FECKLESS parents.

Children who are pushed and stressed and over-scheduled and NEVER allowed nor encouraged to just SIT and THINK and FEEL and BE.

Children who are never taught the RICH FULFILLMENT and VELVETY BLISS that is simple solitude…nor the awareness or appreciation of the MULTITUDES THAT JUST THEY THEMSELVES CONTAIN.

Children who will wake up one day when they are 40 to find that they are EXPERT fugitives from THEMSELVES.

Children who are NEVER allowed to lose or fail and thusly NEVER learn how to do either with grace and dignity…and who will NEVER learn that losing and failing can be the GREATEST GODDAMNED GIFT you will ever receive.

Children who are raised with kid gloves like PRIZE VEAL.

For chrissake…JUST LET A MOTHERFUCKER CLIMB A TREE.

Me, I subscribe to the Roseanne Barr school of raising children…and my larvae turned out JUST FINE:

“If those kids are still alive when my husband gets home from work…I DONE MY FUCKIN’ JOB.” 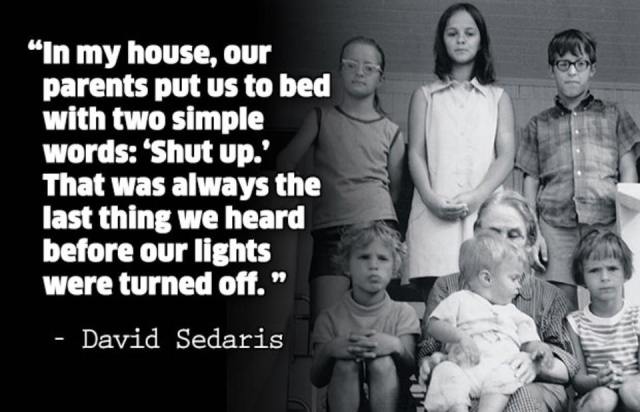