Blanche: “Ah! Look at the shameless way she’s flirtin’ with him. DIS-GUSTIN’!”

Rose: “You flirted with him.”

Blanche: “I’m from the South. Flirting is part of my heritage.”

Dorothy: “Her mother was a slut, too.”

From one Old Slut to another — thanks for the belly laughs. I’m gonna miss you, Miss Rue. xoxo 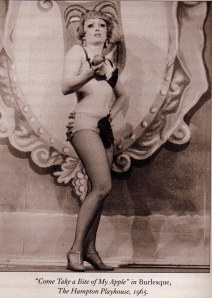