Posted on January 8, 2011 by muffybolding

You think you know heaven? Well, YOU DON’T KNOW SHIT, Gentle Reader! Get your fatass on over to my great friend and partner-in-yarn, CJ Arabia’s, blog to find out just how brilliant it would be to spend two weeks in Japan, peeing in oh-so-polite public toilets, eating sashimi for breakfast, and lounging for several days at an Onsen in Izu Kogen, soaking your old bones in a peaceful, steaming, hot, outdoor bath every five!

So, go and read about the amazing, hilarious, enlightening Japanese adventures of my friends, CJ, Mather, Joe, and Beth, as they watch sumo matches, belly laugh, meditate, and ACHIEVE NIRVANA. 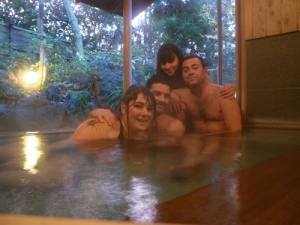 1 Response to adventures with ceej