Posted on January 4, 2011 by muffybolding

My adorable friend and colleague, Gage Munster, is an ASTONISHINGLY TALENTED make-up and special effects artist who I just found out got cast on season 1 of the new series, Face Off, on the SyFy Channel, where he will compete against (AND KICK THE BLITHERING ICEHOLES OF) several other contestants who also do special effects in the film industry. I AM BEYOND EXCITED FOR HIM, and will be the old hooker cheering the very loudest when he fucking CLOBBERS ALL COMERS!

I love you, Gagey! You and your awesome neck-bolt tattoos are going to KILL! KILL! KILL! 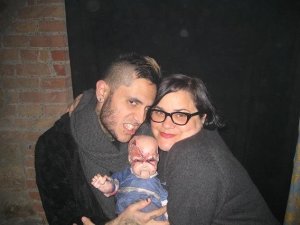 Muffy, Gagey, and the unholy product of their tender lovemaking…on a movie set, Castle Giove, Italy, 2009.