Every writer has a direct “creative genealogy” that can be traced back to a single source, a literary ancestor, the echoes of whose work and/or influence can be felt in your own.

If that is true, then I owe MUCH to this man, who fully nurtured and produced two of the three amazing writing mentors who fully nurtured and produced ME: Wayne Cole, Bonnie Hearn Hill, and DeWayne Rail. These three taught a wry, ambitious, working class girl from Fresno to simply put ass in seat and just fucking WRITE — and helped me believe not only that I could, but that I should. And so, I do. Everyday.

Philip Levine is my literary grandfather — to whom I paid reverent homage in my poem, “Librarian” — the ruthless, fearless, in-your-face teacher with the powerful countenance and the loud fruit:

“One who eats thunderous apples…to fill my sullen silence.”

and to him I owe more than I could ever repay.

Congratulations, sir — and thanks. 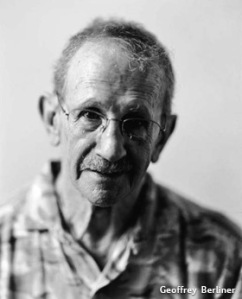 Philip Levine, the powerhouse poet whose Pulitzer Prize helped put the writing program at California State University, Fresno, on the international map, will receive another significant honor today: The title of poet laureate of the United States.

Levine, 83, will be named to the position today by the Library of Congress. He will be the 18th Poet Laureate Consultant in Poetry, the post’s official title, and will serve for 2011-12. The position has been in existence in various forms since 1937.

Levine’s name had been kicked around for years in connection with the title, which includes a $35,000 stipend and the opportunity to work on a project while at the library.

“Actually, because of my age, I just assumed that I had been found wanting some years ago,” Levine said Tuesday with a typical dose of self-deprecation. “I didn’t even think about it much.”

The job description includes giving an annual lecture, introducing poets in the library’s annual poetry series and raising “the national consciousness to a greater appreciation of the reading and writing of poetry.”

It does not involve actually writing any poems, a common misconception that again brings up a lighthearted Levine riff. “I don’t know if they’d want me writing for official events,” Levine said. “A poem to Congress? No, thank you.”

“His plainspoken lyricism has, for half a century, championed the art of telling ‘The Simple Truth’ — about working in a Detroit auto factory, as he has, and about the hard work we do to make sense of our lives.”

Levine, who has written 20 collections of poems, received the 1995 Pulitzer Prize for “The Simple Truth.” He won the National Book Award in 1991 for “What Work Is” and in 1980 for “Ashes: Poems New and Old.”

He is a professor emeritus at Fresno State and also taught at New York University, Columbia University, Princeton University and the University of California at Berkeley, among others.

Critics have called him “a large, ironic Whitman of the industrial heartland” for his emphasis in his poems on the lives of factory workers trapped by poverty and the drudgery of the assembly line. Joyce Carol Oates once called him “a visionary of our dense, troubled, mysterious time.”

Levine was born in Detroit and started teaching at Fresno State in 1958. The university didn’t even have a creative writing program at the time.

His close friend and fellow poet Peter Everwine, who taught with Levine for many years, said the poet laureate designation is a significant honor for Levine that caps a long and distinguished career. And it means more bragging rights for the university.

But there is something deeper to consider: the timing.

“The country seems to be so occupied with who we are, what we are, what kind of country we are,” Everwine said. “We have a dysfunctional government, an economy falling apart, two wars, terrible unemployment. Everyone is sort of saying, ‘Who are we as a people?’ I think Phil’s poetry is directly related to those kinds of things.”

Levine splits his time these days between Fresno, where he lives seven months out of the year, and Brooklyn, where he lives the other five. Although retired from full-time teaching, he makes guest appearances at writers’ conferences around the country.

But he considers Fresno home, even with all the changes over the years.

“The air and the water got worse, but aside from that, the living got better,” he said.