Don’t mind me. Just currently ordering this delightful t-shirt for myself, my 10 siblings, all three of my children, my VAST legions of nieces and nephews and cousins, and EVERY GOTTDAMNED KID RAISED IN AN ETHNIC HOUSEHOLD.

I only had to actually use it but a few select and vital times. Everafter, it was merely THE MYTH that kept asses in line. I carried mine in my purse at ALL times — with the words, “The Enforcer” inscribed upon the side with a black Sharpie pen. When babies became belligerent…all I had to do was raise an eyebrow, don a duck lip, and lift just the tip out of my purse — or what I called SHOWING WOOD — and, after that, babies scattered like adorable cockroaches and ALL WAS WELL.

And, for the record…my babies are GOLDEN. 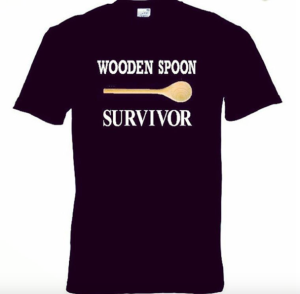