That purse and matching Rerun pom-pom knit hat and scarf — which were birthday gifts from my DARLING father — WERE MY ENTIRE LIFE. Also, I would gladly skip-kick the wall plug outta my own mother’s life support system to have that mod, Lily Pulitzer-looking’ shift dress in my size NOW, goddamnit. 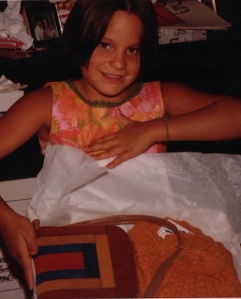 2 Responses to when she was 9